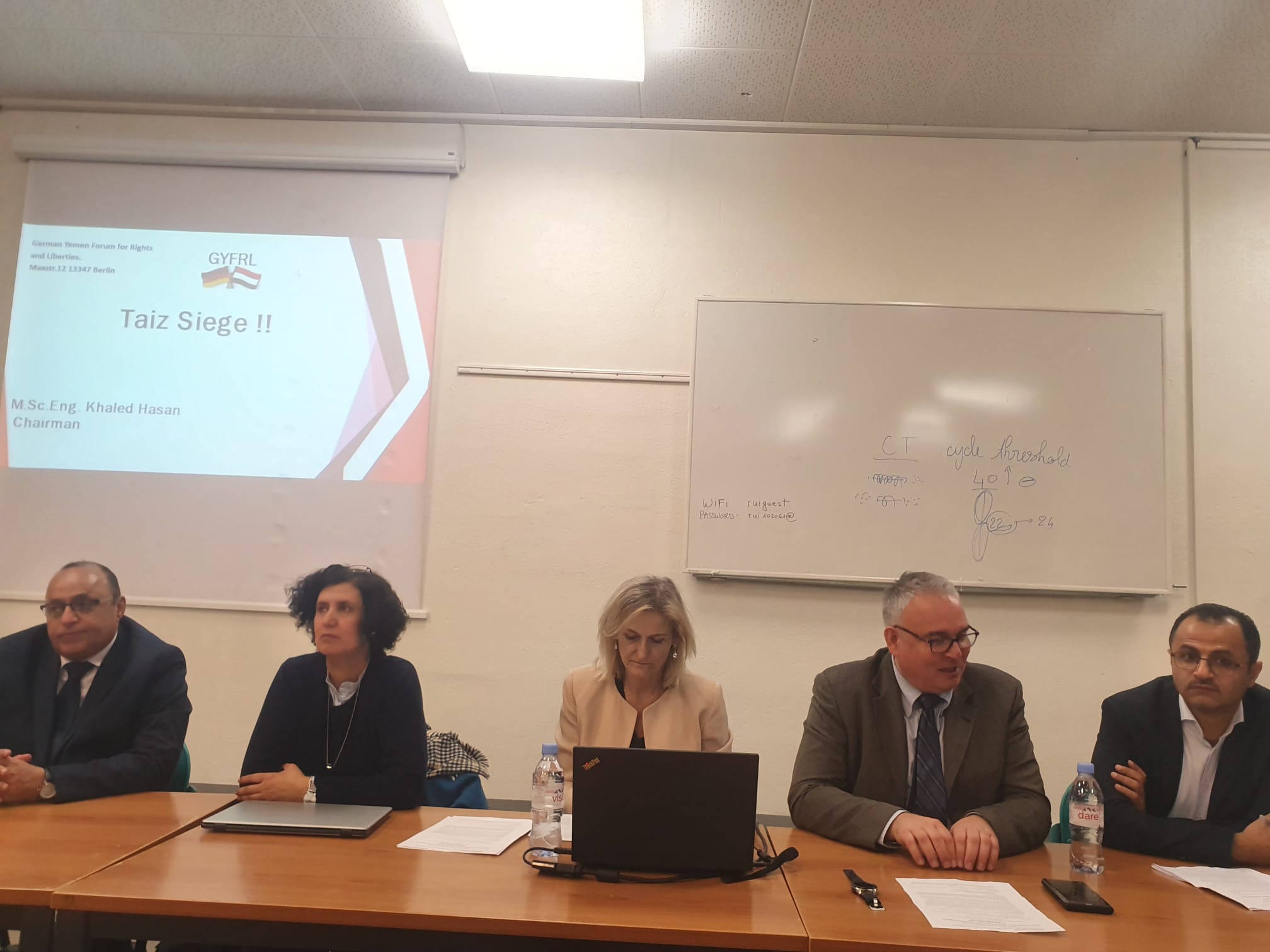 The Yemeni Coalition for Monitoring Human Rights Violations "Rasd Coalition " organized today a seminar on "Houthis Violations; Ongoing Reality - Education as an Example" at the University of Geneva in cooperation with the European Organizations Union for Peace in Yemen, on the sidelines of the 43rd session of the Human Rights Council in Geneva, Switzerland.
The seminar, chaired by Professor Alexander Lambert, Director of the International Health and Development Program at the University of Geneva, addressed major violations affecting the education and children in Yemen.
Dr. Khaled Abdekarem, member of Allied European Organizations for Peace in Yemen, head of the International Center for Media and Development, reviewed children violations (Child Recruitment as an Example).
Dr. Khaled pointed to Houthis targeting of educational process, recruiting children and mobilizing them to the frontlines, and exposing them to risks. He added that schools, mosques and the media are being used to mobilize and indoctrinate children to join the fighting fronts and disseminate Houthis extremist ideology.
Dr. Khaled said, "high rates of children recruitment during the past two years is a matter of concern, and the longer the war years extend, the more it became conducive environment for child recruitment and mobilization”.
He linked the expansion of the unemployment rates to the increasing numbers of child recruited, noting that Houthis entice children, mainly among poor families that suffer from low income and high unemployment rates and high number of youths among such families.
Dr. Khaled revealed numbers documented by Rasd Coalition in this regard during 2019, where Houthis militia recruited 346 children in 14 Yemeni governorates, and the highest recruits were in Sana'a governorate, with (101) recruited children followed by Dhamar governorate with (93) children, Imran Governorate with (67) children, Ibb and Al-Mahwet governorates with (27) children in each.
According to the researcher, the information verified by Rasd Coalition, out of the total children recruited, in 2019, (89) children were killed, and (113) children are still fighting in battlefields, while (136) children fate is unknown, and (8) children have returned to their parents.
Eng. Khaled Al-Afif, member of the European Organizations Union for Peace in Yemen, head of the Yemeni-German Forum for Human Rights addressed the violations that affected the governorates, particularly in Taiz, considering the human situation in Taiz as a clear example of what the Houthis crimes caused in the city that was known as the city of culture and peace.
He pointed out that the Houthis denied access of food, water, medicine and oil products, life-saving oxygen in hospitals, to the city, as well as cooking gas, and severely impeded the movement of citizens, which prompted them to follow mountains and rugged areas to bypass checkpoints controlled by Houthis.
According to the researcher, about 20 hospitals were inoperative either because of the bombing or the lack of potentials due to the siege.
The researcher cited examples of incidents reported by Médecins Sans Frontières, such as the bombing of hospitals in Taiz by the Houthis and the sniping of civilians, including children. Khaled presented some statistics on these violations against civilians in Taiz, including 3000 cases of murder during the period 2015 to 2018, including 680 children and 371 women.
Dr. Arwa Al-Khattab, a Yemeni researcher and academic residing in Germany, addressed the impact of the coup on social life in Yemen, referring to the damage to social life due to Houthis coup on legitimate government and that Houthi is trying to change the social structure through spreading sectarian ideology what caused a war between societal components in Yemen, especially after Iran intervention and support to Houthis. Dr. Arwa pointed to violations to education sector and how Houthis is brainwashing children and exploit in the educational sector to change the children's intellectual structure.
Al-Khattabi also indicated to the economic situation resulted from the Houthis coup, which collapsed the economic situation, expanded poverty and increased unemployment rates due to a number of practices, including salaries suspension, unlawful levies and confiscation of assets and property.
Dr. Arwa, revealed Houthis’ looting and diverting of aid and impeding its delivery to civilians and using them to fuel the war operations. Also, referred to Houthis violations of personal and public freedoms, the restriction of women freedoms and practicing many other violations against them.