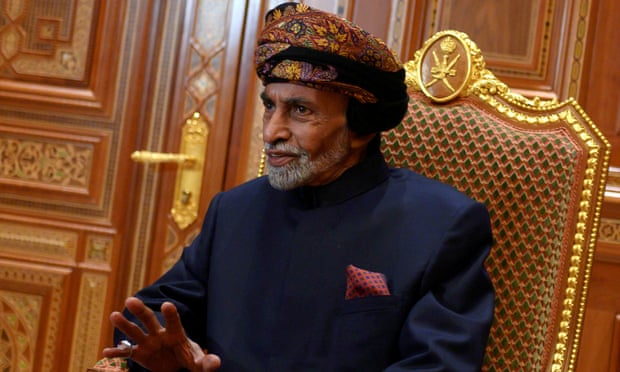 Elaborate discussions are under way in the Omani court about a potential successor to Sultan Qaboos bin Said, who has ruled the Arab nation for nearly 50 years but whose longterm illness has been worsening.

The succession process involves the opening of sealed letters in the court in Muscat identifying the sultan’s choice of successor, if the court cannot agree among itself.

The sultan, one of the mainstays of Middle East politics for the past four decades, returned a week ago from Belgium where his treatment for a reoccurrence of cancer of the colon he has suffered from for four years was cut short. He had been expected to stay until the end of January.

A former British protectorate in the Arabian Peninsula, Oman has been ruled by Qaboos ever since a bloodless coup in 1970 enacted with the help of Britain. He has travelled abroad for medical reasons at least twice since 2014.

Qaboos has no children and has not publicly appointed a successor but he secretly recorded his choice in a sealed envelope addressed to the royal family council. The Al Said dynasty has ruled Oman since the mid-18th century.

Article 6 of the sultanate’s basic law says the royal family should choose a new sultan within three days of the position falling vacant. Should they fail to reach an agreement, the nation’s defence council, the head of the supreme court and the heads of the two chambers of the consultative council would together open the first envelope containing Qaboos’s choice and then enthrone the person he designated.

The purpose of keeping his preferred successor’s name secret is to ensure the authority of the sultan during his lifetime.

There are said to be two sealed envelopes, with the second held in a different royal palace in the southern port city of Salalah. Reports circulating at the weekend suggested that the second duplicate letter is being readied to be taken to Muscat in preparation for opening because of the seriousness of the sultan’s condition and the unresolved disputes within the council.

Most reports said it will contain the same name and that it exists only in case the first envelope cannot be found or if the first letter needs authenticating.

Under Qaboos, who was educated in Britain, Oman has maintained a largely neutral role and acted as a mediator in the region, notably between Iran and the US over the proposed nuclear deal eventually signed in 2015.

It has also been the site of talks between Saudi Arabia and the Houthi rebels from Yemen. Oman’s policy of “friend to all and enemy to none” has allowed the country to develop economically. It has not taken sides in the two-year dispute within the Gulf Cooperation Council between the United Arab Emirates, Bahrain and Saudi Arabia on the one hand and Qatar on the other.