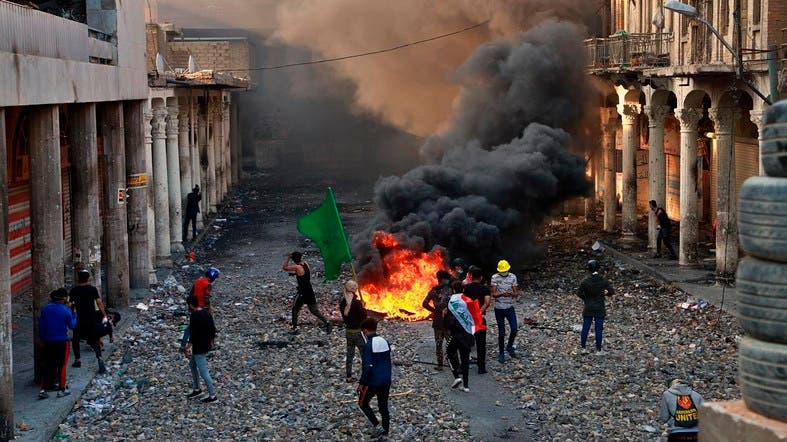 At least 25 people died in the southern city of Nasiriyah when troops opened fire on demonstrators who blocked a bridge before dawn on Thursday and later gathered outside a police station. Medical sources said dozens of others were wounded.

Four others were killed in the capital Baghdad, where security forces opened fire with live ammunition and rubber bullets against protesters near a bridge over the Tigris river. Two died during the day in clashes in Najaf.

In Nasiriyah thousands of mourners took to the streets, defying a curfew to bury their dead after the mass shooting.

Video of protesters cheering in the night as bright flames billowed from the consulate was a stunning image after years in which Tehran’s influence among Shia Muslims in Arab states has been a defining factor in Middle East politics.

The bloodshed that followed was one of the most violent days since the uprising began at the start of October, with anti-corruption demonstrations that swelled into a revolt against authorities scorned by young demonstrators as stooges of Tehran.

In Najaf, a city of ancient pilgrimage shrines that serves as the seat of Iraq’s powerful Shia clergy, the Iranian consulate was reduced to a charred ruin after it was stormed overnight.

The protesters, overwhelmingly Shia, accused the Iraqi authorities of turning against their own people to defend Iran.

“All the riot police in Najaf and the security forces started shooting at us as if we were burning Iraq as a whole,” a protester who witnessed the burning of the consulate told Reuters, asking that he not be identified.

Prime Minister Adel Abdul Mahdi has so far rejected calls to resign, after meetings with senior politicians that were attended by the commander of Iran’s Revolutionary Guards’ Quds Force, the elite unit that directs its militia allies abroad.