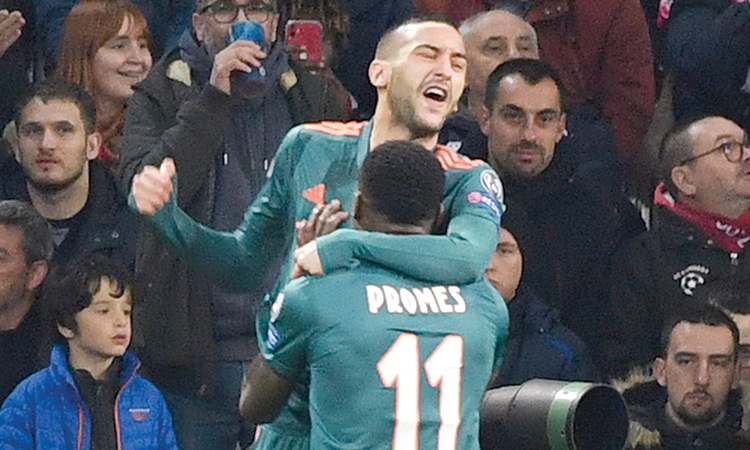 Liverpool are used to making life difficult for themselves, admitted Jurgen Klopp as a 1-1 draw with Napoli leaves the European champions with work to do to reach the Champions League last 16.

Klopp’s men must avoid defeat away to Salzburg on Dec.10 to secure their passage into the knockout stages.

Dries Mertens threatened to inflict Liverpool’s first home defeat in the Champions or Premier League since April 2017 with a sweetly struck opener midway through the first half.

Dejan Lovren’s header protected that proud unbeaten run, but after a host of late winners in the Premier League this season there was no such joy for the hosts this time round.

Napoli remain a point behind Liverpool, but are well-placed to reach the knockout stages as they host winless Genk in two weeks’ time.

Meanwhile, Ajax closed in on a Champions League last 16 spot on Wednesday when the Dutch giants won 2-0 at Lille to open a two-point lead at the top of Group H with just one round of games to play.

Hakim Ziyech scored the fastest goal of this year’s competition inside two minutes at the French strugglers with Quincy Promes hitting his fourth of the tournament on the hour mark.

Four-time European champions Ajax have 10 points from five games, two more than Valencia and Chelsea who fought out a 2-2 draw in Spain earlier in the day.

Ajax host Valencia, who they have already defeated 3-0, in their concluding fixture next month.

“We know each other so well. We don’t even need to talk to each other on the pitch. We’ll go out to win the final game, that’s why we play football,” said Ziyech.

Also, Lyon missed out on a chance to seal a Champions League last 16 place with a match to spare after losing 2-0 at Zenit Saint Petersburg on Wednesday.

A victory in Group G over the Russian Premier League leaders would have claimed a knockout spot for Rudi Garcia’s men.

Lyon are now third behind Zenit, level with the Russians on seven points, ahead of their final group match on December 10 against leaders Leipzig, who are three points clear at the top and assured of a place in the knockout round.

Elsewhere, Daniel Wass’s late equaliser denied Chelsea a place in the last 16 of the Champions League as a profligate Valencia fought back for a 2-2 draw that maintains both sides’ chances of reaching the knockout stages.

A wide open game swung the visitors’ way after Carles Soler’s opener for Valencia as Mateo Kovacic and Christian Pulisic put Chelsea in pole position to avenge their 1-0 defeat on home soil to the Spaniards on matchday one.

However, after Kepa Arrizabalaga had saved Dani Parejo’s penalty, Wass’s cross flummoxed the Spanish international to give Valencia a lifeline.

Both sides are tied on eight points in second place in Group H, two points behind Ajax, who beat Lille 2-0.

Meanwhile, a brace from Lautaro Martinez and a Romelu Lukaku goal handed Inter Milan a 3-1 win at Slavia Prague on Wednesday, keeping the Italians in contention for the Champions League last 16.

Inter are level with Borussia Dortmund on seven points each in Group F topped by Barcelona who clinched a last-16 spot after beating the Germans 3-1 at the Camp Nou.

In the last round of games on Dec.10, Inter face Barcelona at the San Siro while Dortmund host Slavia.